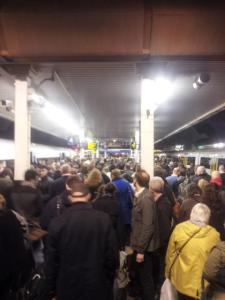 Rail companies – including but not limited to Southeastern – seem to have problems giving passenger accurate and up to date information when things go wrong.

We’ve been looking at the information Southeastern supplied on Twitter during the disruption to services through London Bridge on the evening of Tuesday 18 November.

Accurate and up to date information to passengers, particularly during times of disruption, is crucial – and the lack of it is a major cause of passenger dissatisfaction. Good timely information can help passengers delay their journeys or use alternative routes. It also gives some reassurance that the problem is known and that something is being done about it.

Southeastern say that they have invested in technology and organisation to improve the flow of information to passengers. This has included:

On Tuesday 18 November there were emergency speed restrictions between London Bridge and New Cross after a driver reported a “rough ride”. There were also two broken down trains at London Bridge and a fallen tree on the line between Paddock Wood and Headcorn. Throughout this time the Southeastern website said that there was “minor disruption”, and had no further information; it did not switch to the ‘major incident’ mode with key information on the home page.

We have looked at Twitter from the start of the incident (probably shortly before 1700) to when Southeastern declared it closed at 2353. We have analysed 661 “tweets”, including 100 from Southeastern. This shows:

In short Southeastern yet again fell short of giving passengers accurate, up to date and actionable information.

@Se_Railway your tweeter account will probably be cancelled soon due to slow running fingers through the keyboard area — Dan Luther (@ThePenThatFolds) November 18, 2014

In the following pages we set out the relevant evidence with a commentary.

Next page: Southeastern slow to get out news of delays