I went to London Bridge station last night to take a look round and was lucky enough to witness the chaos between six and seven pm. I wasn’t in any particular hurry to get home and wanted to observe how Southeastern managed the situation of signalling problems compounded by a failed train on platform 8.

When I got there passengers were being held in the concourse at the bottom of the platform escalators, which was pretty full at around six o’clock. It was a fairly confused situation but at one time it looked like all escalators were off with passengers being prevented from using the stairs. I was told that this was because of overcrowding on the platforms above.

There were all manner of staff around. Most visible were people from an events security company who were holding back the hordes along with some Southeastern employees. I saw a few managers around. British Transport Police were out in force after a ‘Code 1’ announcement on Platform 7. 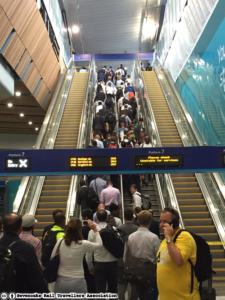 These were poorly managed. I could see the reason for shutting off the up escalators but absolutely no point in shutting off the down escalators. When passengers were allowed onto the two sets of stairs up to platforms 8&9 there was zero flow control, resulting in the passengers coming down meeting the passengers going up – not a good thing to do to a group of frustrated people. This would have been solved by turning on the down escalator – and all escalators were clear of passengers so there was no reason this couldn’t be done for at least one of them. 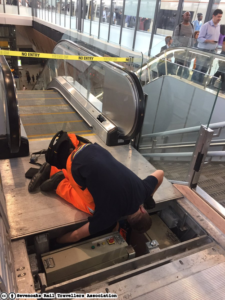 It did not help of course that one of the down escalators was undergoing emergency repair work.

Someone obviously gave the order to hydrate the passengers because at one stage crates of water appeared, with energetic young men running around eagerly pressing bottles on passengers. This, coupled with the descendants of some town criers shouting ‘free water’, did little to provide a sense of calm to a fraught situation. 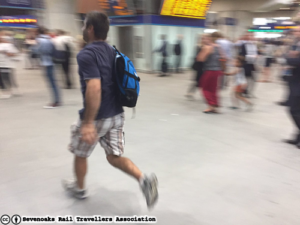 Southeastern had assured us that the signallers (at Three Bridges) had been told not to switch trains between Platforms 7 and 8 at short notice. But that’s what the signallers did. So there was a charge of passengers down and then back up (with the benefit of escalators by this time).

Announcements weren’t bad on the whole. At one stage the indicated train on platform 8 was changing about every minute but announcements, indicator board and reality generally seemed to match up.

I moved up to platform 7 at about 6.30pm. There were lots of people up there but it was manageable thanks to platform 6 not being in operation. Trains coming in – particularly the metro services – were initially packed to the rafters but as time went on became less bad. When I got on a train from Platform 8 shortly after 7pm there were seats to go round but crowding on the platform remained a problem, simply because Southeastern couldn’t get trains through the station fast enough.

An unimpressive response from Southeastern with lacklustre command and control and some puzzling decision making that left passengers fraught and frustrated.

What have been your experiences this week? Please let us know here.