The new Southeastern part of London Bridge opened yesterday morning, and most of the trains to and from Charing Cross are now stopping there. So what have £6.2 billion and years of disruption given us? 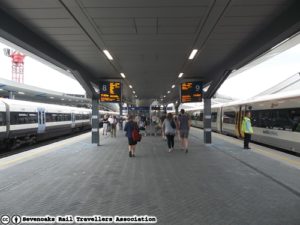 The new island platforms are wide – very wide in places – and there is sufficient space even alongside the “pit” that the escalators go down. That’s in contrast to the old island platforms, where you were not even allowed to stand on the sections by the footbridge. This generous width may of course been needed if there are lift or escalator problems – see below. 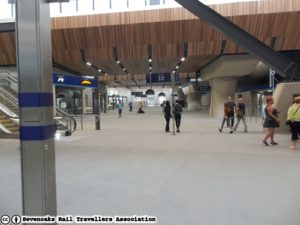 The undercroft is very spacious, both inside and outside the gated area. There is also a spacious walk-through to the Southern platforms within the gated area, a big improvement on the previous dismal overbridge. On a warm summer’s day it had a pleasant, airy, feel; it remains to be seen how it is in winter. 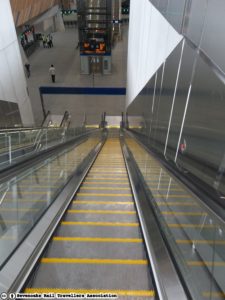 There are two sets of (long) up and down escalators, two sets of stairs and a lift from the undercroft to the platform level of each island. Although previous pictures from Network Rail had suggested that this was an exceptionally long escalator, in reality it does not feel worryingly so. The stairs have two lanes, a number of landings, and a central handrail; again they should be acceptable to most people.

The work on the station is largely finished: yesterday morning there was only minor snagging going on. 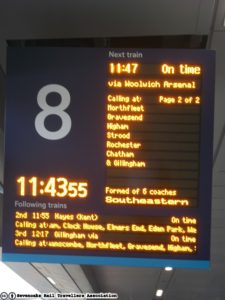 Platforms had a new, larger, design of information display, with information not only about the next train but the two following. 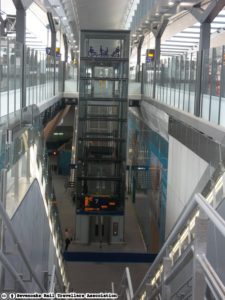 There are only two up and two down escalators to each island. That’s not many, given that platforms 8 & 9 will inherit the reputation of the old platform 6 as the busiest platform in Great Britain – and in fact more trains will be stopping there in the morning as all Charing Cross trains will now stop at London Bridge. It’s even more worrying given the propensity of escalators to be out of action for months (as regularly seen on the tube). If one escalator is out of action for maintenance then it could be difficult to clear the platform between trains. It’s a pity that some of the space used for stairs had not been used for a third escalator that could be operated on a ‘tidal’ basis during the peak and switched off to save energy in the off-peak, and that would have given more contingency. Even more worrying is that there is only one lift to each island – even though there is plenty of room for two (and, actually, for four). Given there is some inherent unreliability in lifts, plus the need for periodic prolonged maintenance, this could be a major accessibility issue. Only one lift will also encourage people to take heavy luggage onto the escalators, which can be dangerous. Perhaps the number of lifts and escalators has been kept to a minimum because of costs; but from a budget of £6.2 billion we would have expected there to be ample provision, including forward planning for routine maintenance and unplanned faults.

The direct route to the tube station is only open during peak hours (and has permanent signing to this effect). The alternative route – and the only route off-peak – is to go out to the south of the station, towards the Shard, and then through a dog leg corridor to Joiner Street. Although there are signs in the station itself, the signage is very poor once one leaves the station.

In the milling area underneath platforms 7 and 8+9 it is very difficult to see the “next train” display for both platforms at the same time. At some times of the day – certainly in the evening peak, and possibly during the middle of the day (as yesterday) some South East London and Kent trains leave from platform 7 and some from platform 8 (yesterday Dartford trains were leaving from platform 8 and mainline trains from platform 7, a reverse of the way platforms 4 & 5 used to operate). Since it is a long way to go down to the undercroft and up to the other platform people will want to be able to see in good time which platform they should be on. (Southeastern tell us that they have given firm instructions to the signallers not to change platforms at short notice, as frequently happens at Waterloo East.) 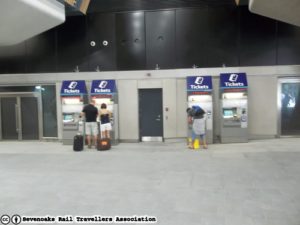 There are only four ticket machines in the undercroft and even on a quiet Bank Holiday Monday there was a queue at the adjacent ticket office. There are actually five additional machines still at the entrance to the old Southeastern section – which is now closed and where no-one now goes). Why haven’t these machines been moved to the new station: there’s plenty of room.

Update 5 Sep: Southeastern point out that there are still two ticket machines in Joiner Street near the tube station and the old escalators to Platforms 1-6. These are a long way from the new gate-line, especially since the direct walking route is not open for most of the day. They need to be moved to the new main concourse. Southeastern also say that there are two more machines elsewhere, but we have yet to find them! 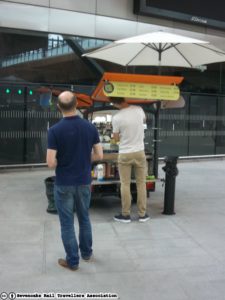 There is a surprising lack of retail space in the undercroft, and none of it is yet operational. There were two small refreshment carts instead, but they were having problems keeping up with demand at a quiet period. Unlike the old station there is no retail space at platform level.

Passenger information still needs work. Signage still needs some attention, and there seemed to be no maps or other aids to let people understand where they were and how to get where they wanted to go. There is also no A-Z display of the time and platform of the next train to each destination; there is one still outside the old entrance to the Southeastern platforms.

What do you think about the new station? Please let us know here.