↓
Home Menu ↓
Skip to primary content
Skip to secondary content
Home→Compensation→“Train Companies to be subject to same law as everyone else” shock! 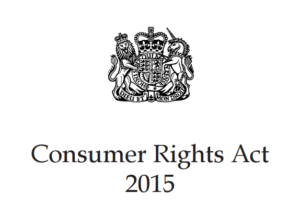 The Government has unexpectedly agreed to make Train Operating Companies such as Southeastern and Thameslink fully subject to the Consumer Rights Act from 1 October 2016.

The Government had been proposing to end most of the exemptions previously given to the rail, maritime and air operators, but still to allow train operators a further 12-month exemption from the Act’s key compensation provisions. A draft Statutory Instrument had even been laid before Parliament to that effect.

However, in a letter this week to Transport Committee Chair Louise Ellman, Rail Minister Paul Maynard said the Government ‘is now of the view that rail customers should not be denied any consumer rights or protections even for a temporary period while the rail industry works to put in place more consistent compensation arrangements between train operators’.

The relevant provision of the Consumer Rights Act provides that traders supplying services to consumers cannot limit their liability to consumers for breach of any of the Statutory Rights to less than the price paid. This provision affects the current rail compensation schemes because these schemes contain terms that limit liability to pay compensation to less than the full ticket price, regardless of the reason for the delay or cancellation, since they are based on fixed or percentage rates of compensation. The proposed exemption would have allowed operators to continue to impose contractual limits on liability that would limit the amount of compensation payable to less than the price paid by the consumer and allow operators to continue to offer partial refunds based on fixed rates or length of delay, such as Delay-Repay.  These limits would have applied in the event of disruption covered by existing compensation arrangements but which might also have been caused by any other breach of the Statutory Rights.

In support of the exemption for rail operators the Association of Train Operating Companies (ATOC) suggested that there could be significant new costs to the rail industry without an exemption, with possibly up to £3.5bn additional costs per year on the rail sector[1]. This may have been shroud-waving, but taken at face value it would show how much excess profit the rail industry has been making by short-changing customers on their statutory rights.

Against this, Which?  argued that existing schemes failed to compensate regular travellers for frequent shorter delays, or paid compensation in cash by default.  These deficiencies of existing schemes could lead to a remedy under the Consumer Rights Act. Which? also argued that an exemption would mean that a transport provider would be free to contract out of any liability for cancellation or delays.

So from 1 October 2016 passengers who are unhappy with their compensation – which currently varies between operators – will be able to pursue their claim through the courts if they fail to resolve the issue with the train company.  New rights – such as being repaid in cash rather than vouchers and being allowed to claim for loss caused by delays leading to a missed train connection – will also apply.

On delays there is much confusion about whether delays of just a few minutes will qualify this October.  The Evening Standard gleefully and emphatically says that they will, and The Times is equally forthright However the Telegraph cautions that passengers will still have to wait a year for this to be implemented, and the Government itself says:

The existing rail industry compensation schemes will continue to be available after 1 October 2016, and will remain the main means of redress for customers when things go wrong.

Rail operators will also be liable for any other breach of the Statutory Rights. Those rights include:

These provisions may provide opportunities for customers to get compensation for failings other than delays. For instance one might expect a railway run with “reasonable care and skill” to have reliable passenger information, trains that don’t overheat, toilets that work and tracks that are deiced in winter.

It’s early days, but it’s good that the same principles that govern everyone else are at last being applied to the rail companies. We hope that they will see that the correct response is not just to improve compensation but also to improve their operations so that customers have no cause to claim it.

There’s an intriguing wider question too. A few months ago the Government supported a continued exemption for the rail industry. Now they’re taking a tougher line. Does this signify that the Government have finally become fed up with the train companies’ failures to run acceptable public services, and that the Government is going to give greater weight to the interest of the passengers ? Again early days, but we hope so!

Update 7 March 2017: There’s now a useful guide to your rights for transport services under the Consumer Rights Act online from Which?