The Annual General Meeting this year will be held on Wednesday 9 October at 8pm in Christ Church Hall, Littlecourt Road, Sevenoaks TN13 2JG.  The Agenda and Papers are here All welcome!

“Fares have gone up by 90% in a decade – twice the rate of inflation. This has given Kent commuters some of the most expensive fares in the UK, thanks to a fare formula which discriminates uniquely against us.”

END_OF_DOCUMENT_TOKEN_TO_BE_REPLACED

“Will there be any consultation with passenger representatives on revised service patterns? If so, when?”

Roger Johnson, Vice-Chairman of the Sevenoaks Rail Travellers Association, has sent a list of detailed questions to Network Rail about the London Bridge Rebuilding.

END_OF_DOCUMENT_TOKEN_TO_BE_REPLACED 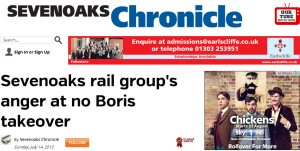 Tony Clayton, chairman of Sevenoaks Rail Travellers’ Association, expressed his anger at the failure of the proposals and insists the services would have improved greatly.

“We are disappointed because it was all gain and no pain,” he said. END_OF_DOCUMENT_TOKEN_TO_BE_REPLACED

We write on behalf of Sevenoaks Rail Travel Association. The Sevenoaks  Chronicle says that KCC is employing consultants to assess the proposal by the Mayor of London for TfL to take responsibility for metro rail services to Dunton Green and Dartford from the Department for Transport. I understand you are looking for answers in a few weeks, although this proposal has been known to us for over a year. We have had a series of discussions with TfL and others about it, and will be happy to pass the results to the consultants.

Although initially sceptical, SRTA is now convinced that the Mayor’s proposal makes sense, not just for Sevenoaks and Dartford but for the whole of Kent and South East London. END_OF_DOCUMENT_TOKEN_TO_BE_REPLACED

From the Sevenoaks Chronicle:

The Sevenoaks Rail Travellers Association (SRTA) this week called for action over the London Bridge closure plans, which will affect commuters from Sevenoaks, Hildenborough, Dunton Green and Knockholt.