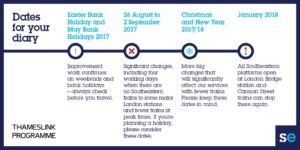 There was a small eruption on 29-30 January when Southeastern announced that on August Bank Holiday and for four working days afterwards there will be no Southeastern trains at Charing Cross, London Bridge and Waterloo East – and said:

“If you’re planning a holiday, please consider these dates”

We’ve been investigating what’s happening, why it is happening in the days after the Bank Holiday rather than earlier in August, and how customers were consulted.

We understand that there’s a lot to do, and this requires an eight-day “possession”:

We’re told that comparable volume of work was delivered over Christmas 2015 where Network Rail carried out the works over 10 days with no services through London Bridge.

In our view it’s probably better to get this over with in one go, rather than close London Bridge every weekend, and delaying until Christmas 2017 would push back the completion of the London Bridge work and the resumption of “normal” services.

Why in the week immediately following the Bank Holiday?

However the timing of the work is hard to explain. For such a big change the preparatory work is usually in place weeks in advance so the possession does not need to be delayed, and that seems to be the case here. So it should have been possible to close the tracks for a week earlier in August.

Indeed unconnected work on the South-Western side of Waterloo is being carried out between 5 and 28 August – which is a good choice because it is the peak of the normal holiday season. By contrast Bank Holiday Monday usually marks the start of the commuter “rentree” as people return from holiday and start returning to work.

Network Rail have failed to give a good explanation of why the work is not being done before the Bank Holiday – say from 19 August up to 27 August (leaving the Bank Holiday Monday itself as a day of live running to bed in the new signals and power before commuter services on Tuesday 29 August). There seems to be no technical reason why not. Network Rail say that an earlier date would require London Bridge to be closed for five working days rather than four, but have not been able to give any figures to show that this would be worse for customers: to us it looks as though fewer people would be affected in the first week, when many people are still on holiday, than in the second week, as people return to work.

“All engineering work that will impact on train services is subject to an industry process where Network Rail consults with train operators and freight operators. If train operators believe that the work will prevent them from running a reasonable service for their passengers then they can, and do, object to planned work. When this happens, Network Rail and the operators work together to find a solution that will allow the operator to run a reasonable service while Network Rail carry out significant and important engineering work such as that proposed for August.”

That says a lot about the rail industry’s cavalier attitude to the passengers that ultimately pay their wages:

What do you think? Please let us know here.