↓
Home Menu ↓
Skip to primary content
Skip to secondary content
Home→TFL→Rail devolution in the South East: time for everyone to speak up! 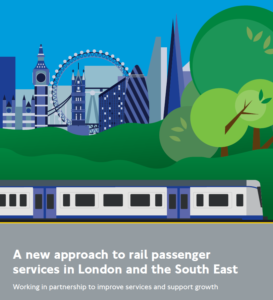 Stories have been circulating for a few days that the devolution of Metro South Eastern rail services to Transport for London, and the associated benefits for longer-distance commuters, may be torpedoed by the Department for Transport in coming weeks.

Official replies to us, and to Sevenoaks District Council, say the Department for Transport are still evaluating the devolution proposal from TfL. But they’ve had three years to do this and TfL are promising a Benefit to Cost ratio of 4.3 : 1. So it should not take long!

Most of north London’s rail services – out to places like Watford – are already with TfL and deliver much better services, more reliable, staffed stations, reduced fare evasion, integrated and cheaper fares. Stopping services from Sevenoaks, like the rest of south London are the poor relation. If nothing changes we’ll stay that way.

Today’s announcement by the Secretary of State is silent on devolution. Instead it’s about some reorganisation within the rail industry, So it doesn’t address better services for customers, more focus on supporting economic growth in the region, stronger management of train operators, and greater local accountability that his own Department promised in January. Sources close to the ministers concerned say in response to the devolution proposal that ’they don’t want to reorganise the rail system in London’ – which is ominous. Yet today’s statement by the Secretary of State seems to be about a bigger reorganisation of the rail system everywhere! Better co-ordination between Southeastern and Network Rail would certainly be welcome; and the idea has been tried before on South West Trains. Indeed, as part of the change, we hope that the Department for Transport will remove the financial structure where Southeastern actually profit out of poor Network Rail performance – which hardly gives the train operator an incentive to help improve things.

Achieving these benefits does not depend on Network Rail: it’s a matter of how the train service is specified, of how the operator is selected and managed and of better local accountability for services. Sadly the Secretary of State’s announcement today does not make any progress towards the goals his own predecessor set out earlier in the year.

It’s time for members and others to make their voice heard again. Otherwise the opportunity will be lost for a further cycle and we’ll be stuck with another franchise on the current, failing, model. So we would encourage our members and supporters to make it clear to their MPs, wherever they come from, that they want the sorts of improvements originally promised by the joint DfT/TfL prospectus – and which 74% of consultation responses supported.   For Sevenoaks that’s Sir Michael Fallon and you can write him an email here. Other MPs can be contacted using  https://www.writetothem.com/

Please also give us your views here.

We want the devolution plans agreed by London, Kent, Surrey and Sussex – and the previous Secretary of State – to go ahead now.