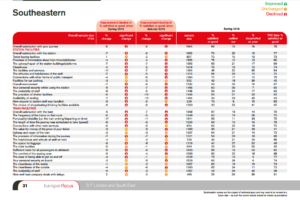 The latest National Rail Passenger Survey shows that Southeastern are again joint bottom (with sister company Southern) at 69%. What’s more, the detailed figures show that Southeastern have not improved on any of the detailed indicators – even those, like ticket-buying, the provision of information and the helpfulness of staff that cannot be blamed on Network Rail or the work at London Bridge.

Southeastern’s overall customer satisfaction has dropped 6 percentage points compared to six months ago and to a year ago. The fall cannot be attributed to the London Bridge work as passengers were suffering from that last year too.

By contrast TfL’s London Overground service again scored 88% overall customer satisfaction and was second best of the London commuter services (just behind Chiltern). All their 35 detailed scores were unchanged or better. Since TfL use the same sort of Network Rail infrastructure (including “3rd rail” electrification) and suffer the same weather as Southeastern, the difference must be mainly due to the operating company itself.

Thameslink, previously on the naughty step, managed a level performance of 74% overall customer satisfaction and almost all the detailed indicators unchanged. Again they also use 3rd rail electrification south of the Thames, and there is not usually a big difference in weather between platform 4 and platforms 1/2/3 at Sevenoaks.

Southeastern’s Managing Director has said (archive)”The survey was undertaken during the winter months when severe weather and infrastructure issues meant we were not able to give our passengers the services we want to provide and that they rightfully expect.”

It’s true that the survey was done between 11 January and 20 March, and so the closure of the Dover-Folkestone line and Storm Imogen would be in the figures. But the detailed results show that Southeastern have not improved on any of the 35 detailed indicators. This includes all the indicators that are entirely within their control and that are independent of weather, rail infrastructure, London Bridge or Network Rail. Moreover there is no visible improvement in scores for indicators that should be benefiting from the “investment” (or catching up after a decade of neglect) that Southeastern claim to be making.

There’s a footnote in the Transport Focus report that Southeastern’s scores are “the subject of technical query .. and should be treated as provisional”. Transport Focus’ methodology is well established; it’s the normal benchmark for Train Operating Company performance agreements. Does this footnote mean that Southeastern are arguing with the Ref? Our own view is that the Transport Focus methodology actually tends to flatter commuter train companies as it asks specifically about the current or most recent journey, and so does not fully capture the cumulative week-in week-out misery of commuter customers.