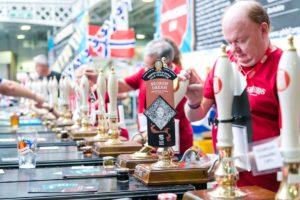 Tuesday 7 August – The first day of voluntary work at the Great British Beer Festival serving on a bar, the travel was like my commuting days. The day did not start well, the ticket machine was not working at Bat & Ball. I travelled to Sevenoaks on the 09.21 service. Accordingly, when I arrived at Sevenoaks a minute late arrival gave me three minutes to obtain a ticket before the 09.29 to London Bridge departed. Fortunately for me, the train was running three minutes late therefore I managed to board it.

Wednesday 8 August – Day two, the ticket machine was not working at Bat & Ball again. I travelled to Sevenoaks on the 09.21 service which again arrived a minute late. I just managed to buy a ticket and board the 09.29 to London Bridge which departed at 09.30.

Thursday 9 August – Day three, surprise, surprise, the ticket machine at Bat & Ball was not working. I travelled to Sevenoaks on the 09.21 service which was a minute late arriving again. Like yesterday, I just managed to buy a ticket and board the 09.29 to London Bridge which departed at 09.30. I travelled home via Bromley South on the 21.40 service which was two minutes late, and then the 21.23 to Bat & Ball which was on time. I noticed that the ticket machine at Bat & Ball station was working, at last!

Friday 10 August – Day four, I eagerly tried to buy an off peak “All Zones One Day Travelcard” at Bat & Ball station this morning. However, computer says no! The ticket machine would not offer the required ticket. I travelled to Sevenoaks on the 09.21 service which was on time today. At Sevenoaks I tried to buy a ticket from two self-service ticket machines, and both failed to complete the transaction. By now, I had given up hope of catching the 09.29 to London Bridge and proceeded to the ticket office window. I purchased my ticket and asked why the self-service machines failed to complete my attempt to buy a ticket. I was advised that they were failing to connect to the bank therefore the payment could not be made. If this was a known problem why was a suitable notice not displayed on the machines, or a member of staff not advising people when they approached the machines that they were accepting cash only. Customers time wasted, and potential train departures missed. Good customer service award to Southeastern!!! I then discovered that Southeastern were not having a good day and services to London were running late. The platform information screen was showing that the 08.56 was the next fast train due to depart for London. The screen display change to showing that the 08.56 had arrived. However, the train ran fast through platform and did not call at Sevenoaks. The next service due was the 09.29, this train departed at 09.40 and arrived seventeen minutes late at London Bridge. I eventually arrived at Kensington Olympia thirty minutes late, Delay Repay claim submitted.

Saturday 11 August – Day five, I successfully bought a ticket at Bat & Ball station this morning. I travelled to Sevenoaks on the 10.21 service today which arrived one minute late. The 10.29 to London Bridge was nine minutes late departing Sevenoaks and thirteen minutes late arriving in London.

Two things occurred to me whilst travelling this week: –

1. London Bridge appears to be in excess of capacity already. Queues to use the toilets were noticed everyday
2. Earl’s Court exhibition centre has been closed and demolished for a few years now. However, announcements on the London Underground are still advising people to alight at Earl’s Court for the exhibition centres, why!

Wednesday 15 August – A trip to Stafford today: I commenced my journey on the 08.26 from Bat & Ball to Swanley where arrival was three minutes late. Across the platform the 08.51 to Victoria was waiting. This train departed one minute late and was three minutes early in London. I transferred to Euston using the Victoria line. The 10.07 to Stafford arrived there one minute late. I returned from Stafford on the 15.42 which departed seven minutes late and arrived in Euston twenty-six minutes late. Accordingly, I missed my connecting service at 17.48 from London Bridge. I travelled to Sevenoaks on the 18.10 which departed at 18.13, it arrived four minutes late at Sevenoaks. The 18.52 from Sevenoaks to Bat & Ball departed five seconds early but arrived twenty-five seconds late at Bat & Ball! However, my journey home was delayed by thirty minutes, a Delay Repay claim has been submitted to Virgin Trains. A return journey from Bat & Ball to Stafford is about three hundred and eighteen miles, the fare for this was £48.25.

Wednesday 22 August – My destination is Peterborough today. I departed Bat & Ball at 07.53 on the 07.52 service to Sevenoaks where it arrived on time. I travelled half an hour before I needed to because I was booked on the 08.31 departure from Sevenoaks to London Bridge and did not want to risk the 08.23 from Bat & Ball missing a connection with this train. However, today the 08.23 arrived on time. At Sevenoaks some trains were being diverted to Victoria due to signalling problems in the New Cross area. The 08.31 service that I was due to travel on was shown on the platform information screens as going to Charing Cross. However, when it arrived at Sevenoaks it was showing Victoria as being the destination of the front of the train. The train departed two minutes late and ran “fast” to Victoria, (frequent delays on route waiting for a path and a platform at Victoria), it arrived at 09.13. This was seventeen minutes after it should have arrived at London Bridge. The Victoria Underground line delivered me to King’s Cross for the 10.03 departure to Leeds which formed my train to Peterborough. The train was an Intercity 125 diesel which arrived on time at Peterborough. Bat & Ball to Peterborough and return is approximately two hundred and three miles, the fare paid for this journey was £23.10.

Wednesday 29 August – My last trip by rail this month is to Kidderminster. I commenced my journey on the 06.21 from Bat & Ball to Sevenoaks where the train arrived one minute late. The 06.31 to London Bridge was also one minute late. I crossed London on the Northern Line and made for the first-class lounge at Euston station. I had taken advantage of a Virgin first class ticket sale. I departed Euston on the 08.43 service enjoying a tradition English breakfast on my journey to Birmingham New Street where arrival was six minutes late. I walked to Birmingham Moor Street and used the 10.29 service to Kidderminster. Arrival at Kidderminster was one minute late. I crossed the station forecourt to the Severn Valley Railway station and boarded the 11.35 steam hauled service to Bridgnorth. At Bridgnorth the sign on the wall in the Railwayman’s Arms advised customers that they downed 1,828 pints last week. I departed Bridgnorth at 12.45 bound for Bewdley. After a look round Bewley I continued my journey to Kidderminster arriving there at 16.00.

I returned to Birmingham on the 16.23 service to Birmingham Moor Street where it arrived two minutes late. I walked to New Street station and headed for the first-class lounge whilst I waited for the 18.10 departure to London Euston. Two previous departures to London had been cancelled due to a fatality on the line earlier in the day. Accordingly, the train was very busy. A summer barbeque with salad was my chosen meal option which was served after departing Coventry. This train stopped at additional stations to cover for earlier cancellations and arrived twenty-three minute late at London Euston. Accordingly, I missed my connecting trains back to Bat & Ball and my journey was delayed by thirty minutes. A Delay Repay claim has been submitted. The fares breakdown for today’s travel is as follows, return from Bat & Ball to Euston £23.15, first-class return Euston to Birmingham New Street £34.00, and a return from Birmingham to Kidderminster £5.15. The return fare from Sevenoaks to London does appear to be excessive when you consider the distance travelled!