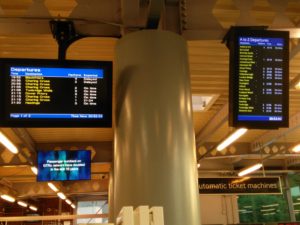 Here’s this week’s new game from Thameslink.  It’s their virtual version of the Three Card Trick (aka Find The Truth).

Study the attached photo (click on it to expand), and imagine you were at Sevenoaks station on Tuesday night, heading for Otford.  All you have to do is to guess which one of the three Passenger Information Screens is telling The Truth!