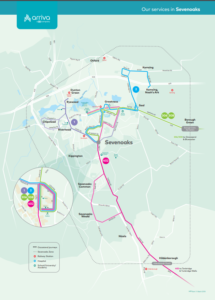 Arriva are starting a new commuter minibus service for Dunton Green, Chipstead, Bessels Green and Riverhead on Monday 12 March. This is a welcome reinstatement of the parts of the 452 service axed last year and largely recreates the earlier, popular, S2 service.

The “1” minibus will run in the morning commuter period from Ryewood at 0628, 0648, 0708 and 0741 via Tesco, Witches Lane, Bessels Green, Chipstead Square, Chipstead Lane, Bullfinch Lane, Riverhead shops and on to Sevenoaks Railway Station and Bus Station.

The full timetable is online and the key stops are:

The existing Arriva 452 route between Kemsing and Sevenoaks via Seal will also become the “2” minibus, with commuters services from Kemsing at 0648 and 0758, and late afternoon/evening services from the Railway station at 1650, 1800 and 1910. The full timetable is online.

There’s a map of the new services here.