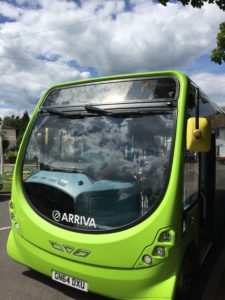 Arriva’s proposal to axe the 402 bus between Sevenoaks and Bromley has attracted a lot of local criticism. The plan continues to be surprising as our own observations have shown that in the morning between Sevenoaks and Knockholt there are always more than 10 passengers on the hourly service.

It appears that Kent County Council have now agreed with Go-Coach to support a limited replacement service number 431 from July. This will do three round trips in the middle of the day between Sevenoaks and Orpington (in addition to the existing schools service).

That’s better than nothing for these surprisingly isolated villages. However it is a much poorer service than the existing 402:

Moreover by going to Orpington (rather than Bromley) the new service would compete more directly with the TfL R5/R10 services. This may be bad for the sustainability of all future services.

Knockholt Parish Council have arranged a public meeting to discuss this on Thursday 22 June at 1900 in Knockholt Village Centre. It will be attended by KCC and Go-Coach representatives. If you care about these bus services it is important that you attend!