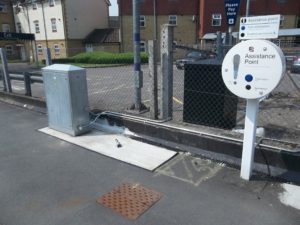 The base for the new ticket machine, photographed a month ago

It’s now months since Southeastern ripped out the “Permit to Travel” machine at Dunton Green. In one sense it was no great loss: it seldom worked. However although the intention seems to have been to replace it with a credit-card-only ticket machine, Southeastern have failed to install the new machine: so far they have only installed a concrete base and some sort of electrical cabinet – together with some dodgy-looking conduit that may bend the first time somebody steps on it.

The lack of either a Permit to Travel machine or a proper ticket machine means that Dunton Green travellers cannot buy a ticket before travelling. And because all trains from Dunton Green are driver-only-operation they cannot buy a ticket on the train either. We wonder how many law-abiding Dunton Green passengers have been unfairly challenged by “Revenue Protection Officers” for not having a ticket?

We have asked Southeastern why there has not been more co-ordinated project management of the ticket machine change-over at Duntonhttps://twitter.com/Se_Railway/status/743381936756895745 Green (and at Bat & Ball and Shoreham). Surely it is not rocket science to arrange for the removal of the old machine and the installation of the new machine to be co-ordinated?

Thanks to our Dunton Green supporter Paul Malyon for continuing to highlight this problem.

Update 16 June: Southeastern have told us that the old PERTIS machines have been removed early for the new ticket machines to be installed in the same location. However the new machines need a larger concrete base and cabling cabinets to be installed, and then BT need to connect network cabling, and then the ticket machine itself is installed. Southeastern say that they are “on schedule with the overall project” and it should be completed “by September” (the Twitter people at Southeastern said today that Shoreham should be done in “6-8 weeks subject to external telecoms work being completed”). Frankly this looks like poor project management and co-ordination by Southeastern – it should not take six months to switch over machines, especially as this is the second phase of a long-running progamme. If it really was going to take six months, why wasn’t the new machine installed alongside the PERTIS machine? – at Dunton Green and Bat & Ball there is plenty of room for this.