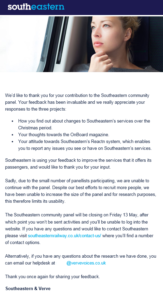 In an email to participants today Southeastern have announced that their “Community Panel” is being closed with immediate effect. We’re not surprised: we have already written about the lack of engagement by Southeastern in the Panel and how there has been only one comment this year on how good or bad their services are. But we’re disappointed that there has been no effort to develop a new, more engaging, successor. Instead participants have been told that they should simply contact the out-sourced ‘Customer Services’ department in the Midlands.

We discussed the Customer Service panel with the relevant staff at Southeastern recently. One piece of the puzzle that we had not appreciated is that Southeastern regarded the whole exercise as market research. As a result, they had treated comments posted as confidential and only to be reported to them in anonymised summary. That at least explains why Southeastern did not respond to any of the comments – they were not even reading them! 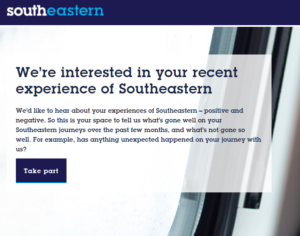 However, in our view members of the community panel were led to believe that their comments would be read and acted upon; on the website it said (in the Southeastern branding):

“We’re interested in your recent experience of Southeastern. We’d like to hear about your experiences of Southeastern – positive and negative. So this is your space to tell us what’s gone well on your Southeastern journeys over the past few months and what’s not gone so well.”

Southeastern say that they have closed the panel

“due to the small number of panellists participating. Despite our best efforts to recruit more people, we have been unable to increase the size of the panel and for research purposes, this therefore limits its usability”.

That’s also surprising as we understood that of around 54,000 on their mailing list they had recruited around 750 to the panel, and that they were getting a 30% percent response rate to email surveys to that panel. In addition, over 10% had posted on the community forum and 150 had taken part in the fault reporting trial. That seems to us very good going, particularly with the lack of engagement and, apparently, only one attempt at recruitment into the panel.