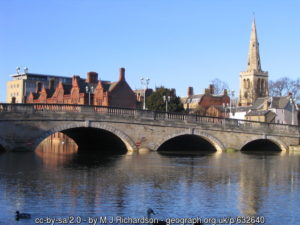 Thursday 4 October – My first journey on the railway this month was to Bedford. I travelled on the 09.25 to Blackfriars where the train arrived two minutes early. Accordingly, after changing trains, I arrived at St Pancras International slightly earlier than I expected to. I transferred to the East Midlands part of the station and boarded a class 222 Meridian train bound for Nottingham which took me to Bedford, arriving two minutes late. My return journey was on a Thameslink class 700 train at 15.19. This train arrived thirteen minutes late at London Bridge due to the Police being called to deal with an incident on the train at St Pancras International.

Saturday 6 October – Today is “Southeastern Super Saturday”, travel anywhere on Southeastern as much as you want to for £20.00. There’s more about my travels on this day in a separate post at https://srta.org.uk/wp/posts/3228.

Monday 8 October – A short retail therapy excursion to Bromley South today. I travelled on the 09.52 from Bat & Ball and returned on the 11.23 from Bromley South. Both trains were on time. 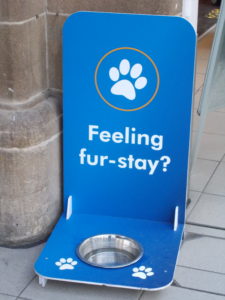 Thursday 11 October – I am heading to Sheffield today. I commenced my journey on the 07.21 from Bat & Ball to Blackfriars where the train arrived five minutes late. All Thameslink services seemed to be running late and I continued my journey on the late running 08.34 to St Pancras International; arrival at St Pancras International was five minutes later than it should have been if all trains were on time. I could not board the first train from Blackfriars to St Pancras even though I walked the length of four coaches! The 09.02 East Midlands train to Sheffield departed on time but arrived eight minutes late. Sheffield station looks after its four-legged customers, an elaborate drinking bowl is provided, (see photograph). I used a Plusbus ticket to travel on the Sheffield Super Trams to and from my ultimate destination of Kelham Island. I returned from Sheffield on the 17.29 which arrived two minutes late in London. I transferred to London Bridge on the Northern Line and boarded the 20.19 to Sevenoaks where it arrived one minute early. The 20.52 to Bat & Ball was on time. Bat & Ball to Sheffield and return is approximately 382 miles and the fare paid was £40.90.

Saturday 13 October – My destination is East Grinstead today and then the Bluebell Railway’s “Giants of Steam” event. Normally I would drive because it only takes about forty-five minutes rather than about two and a half hours by train. However, I needed to visit a location close to Victoria station on route therefore I used the train. I commenced my journey on the 08.55 from Bat & Ball to Bromley South where it arrived on time. Southeastern were running late and I boarded the 09.17 service to Victoria at 09.27. This train arrived at Victoria one minute before the train that I should have connected with would have. However, it was twelve minutes late! The 10.21 from Victoria to East Grinstead arrived one minute early.

Sunday 14 October – I am travelling to Harpenden today to see Joanne Shaw Taylor play at the Harpenden Public Halls. I had intended to travel from Bat & Ball to Sevenoaks, then on to London Bridge and change there on to a Thameslink service to Harpenden. Bat & Ball to Blackfriars and change there on to a Thameslink service to Harpenden was not an attractive option due to the tight connection times; especially on the return journey. Due to engineering works and there being a replacement bus service between Orpington and Sevenoaks I drove to Orpington and commenced my rail journey from there. The 17.10 fast service to London Bridge was formed of two five coach class 376 units; no toilets on these trains and only slightly better seats than a Thameslink class 700 train. Arrival at London Bridge was three minutes late. The 17.49 Bedford service that would take me to Harpenden arrived at London Bridge five minutes late and was three minutes late at Harpenden. Passengers were advised that this train was delayed due to the Police being required to remove a disruptive passenger. This was the second time this month that the Police have been required to deal with incidents on Thameslink trains that I have been travelling on. This train was a class 700 formed of twelve coaches and was very busy; many people were standing but there were a lot of empty seats. Passengers seem to be reluctant to occupy the window seat when the aisle seat is taken because it is too cramped for comfort. In the area that I was seated all visible information display screens were not working properly. I returned on the 22.24 service to Three Bridges which arrived at London Bridge three minutes late. Again, this train was formed of twelve coaches. There are five toilets on a class 700 train of this length but only one was working.

Thursday 18 October – My destination is Nottingham today; my first train was the 06.55 from Bat & Ball to Blackfriars where it arrived five minutes late. This seems to be the norm recently, most services heading north from Blackfriars were running late. I arrived at St Pancras three minutes earlier than the suggested time when I bought my tickets on line, but this was due to using a late running service! The 08.34 from St Pancras to Nottingham arrived four minutes late. I returned on the 15.45 departure from Nottingham which departed eight minutes late and arrived in St Pancras twelve minutes late. Accordingly, I missed the connecting services to Blackfriars and Bat & Ball. Therefore, I transferred to London Bridge on the Northern Line and caught the 18.10 service to Sevenoaks. Bat & Ball to Nottingham and return is approximately 307 miles and the fare paid was £32.65.

Wednesday 24 October – My destination is the O2 Arena this evening to see U2 play there. I drove to Sevenoaks and parked my car then travelled to London Bridge on the 17.42 service. This train departed two minutes late and arrived in London six minutes late. I returned on the 22.49 service from London Bridge to Dover Priory which arrived one minute early at Sevenoaks.

Thursday 25 October – I am bound for Norwich today, I used the 07.23 departure from Bat & Ball to Sevenoaks where it arrived one minute early. I had to travel on the 07.51 departure from Sevenoaks to London Bridge where it arrived seven minutes late. I transferred to Liverpool Street station using the Northern and Central Underground lines changing at Bank. There were problems on the Jubilee line and access to London Bridge Underground station was restricted. I could not use the usual route to the Northern line and was directed outside of the station, along Tooley Street towards another entrance. When I got to the ticket barriers they were also locked out of use. About five minutes passed before access to the platforms was reinstated. I arrived at Liverpool Street only ten minutes before the departure of my train to Norwich. Due to Southeastern restricting my ticket to the 07.51 departure to London Bridge whilst I waited on Sevenoaks station I watched four fast services to the London Bridge depart, I could have arrived at London Bridge by 07.52! An earlier arrival in London would have helped relieve the pressure of transferring to Liverpool Street caused by the disruption on the Underground.

However, when I arrived at Liverpool Street station Greater Anglia were not having a good day and the 09.00 departure to Norwich was shown as “delayed” on the information screens. Delayed usually means that the existence of the train is acknowledged but currently information about the departure time is not known and in the worse case if the train will be cancelled. Accordingly, I looked for a member of staff to establish if any update was available, I was told that the train had been delayed on its inward journey and was expected in about five minutes. The service departed seventeen minutes late and arrived at Norwich twenty-eight minutes late, just missed out on another Delay Repay claim! I understand that the reason for the delays were due to a broken rail somewhere just outside of Norwich. I returned on the 15.00 departure from Norwich, but the earlier problems were still affecting services, and as the train was approaching Stratford it was running twenty minutes late. I would not have managed to connect with the train my ticket advised me that I must travel home from Cannon Street on if I continued to Liverpool Street therefore I decided to detrain at Stratford and take the Jubilee line to London Bridge. I travelled back to Sevenoaks on the 17.48 Ramsgate service which arrived at Sevenoaks five minutes late. Here I discovered that Thameslink had cancelled the 18.22 to Bat & Ball therefore I was delayed by thirty minutes waiting for the 18.52 service, which was on time at Bat & Ball. Another delay Repay claim submitted. Bat & Ball to Norwich and back is approximately 280 miles and the first-class return fare paid was £35.60.

There were very few toilets in working order on the 15.00 service from Norwich to London, I had to walk through the train from coach “J” to coach “D” to find a toilet that was usable. Those passed were either locked out of use or blocked. The train was very full, and this was causing problems. I have complained to Greater Anglia about this, it will be interesting to see what they say in reply when I receive a response from them.

Friday 26 October– My destination is Twickenham today. I had hoped to depart from Bat & Ball on the 11.51 service to Sevenoaks but the nurses at my Doctor’s surgery were running late. Therefore, I used the 12.21 departure which arrived at Sevenoaks one minute late. The 12.29 from Sevenoaks to Waterloo East arrived in London three minutes late. This train was only four coaches and was very busy. People were standing just like a peak period commuter service. The 13.20 from Waterloo arrived at Twickenham on time. I intended to return from Twickenham on the 15.53 departure, but I boarded the late running 15.41 service at 15.44. This train arrived at Waterloo three minutes late.

Wednesday 31 October – Today is my monthly reunion in London with my former work colleagues. Due to attending the “Hard Hat” tour of Bat & Ball station this morning I set off later than I normally do. I departed Bat & Ball on the 12.25 service and travelled to Catford where the train arrived one minute early. I continued my journey by bus bound for Lewisham. I was ready to depart Lewisham earlier than I had expected to therefore I had some time to kill. I boarded a bus to Lewisham station and then travelled on the Docklands Light Railway to Stratford. Leaving Stratford, I headed for Tower Gateway where I had intended to continue my journey in to the City by the number 15 bus. However, after waiting for about twenty minutes and no bus appearing I walked back to Tower Hill and continued my journey by Underground bound for the Crosse Keys.