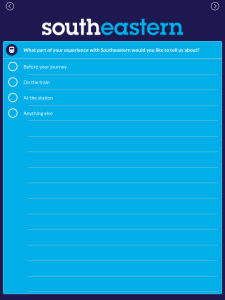 Members of the Southeastern Community Panel have been taking part in an eight-week trial of a feedback application.

We used the version of the Feedback App that was available for an Apple iPad. It was an easy download from the Apple AppStore that install a generic application from a firm called Reactn, and then one had to enter a code to use it for Southeastern problem reporting.

The application was reasonably straightforward to use once we got the hang of it. Specific areas for attention before wider release included:

Submitting a problem report always led to a quick email (from Reactn) saying that the problem had been noted and passed on to Southeastern for action. The text in each case was different and the email signature varied; it seems likely these were genuine human-generated emails rather than the programmatic response one gets from the Southeastern Contact Centre.

We consider that feedback applications such as this create a useful alternative channel to reporting problems for those who want to do so. But Southeastern need to go further to make it genuinely transformational:

In short, this is another case where Southeastern have had a good idea but failed to understand that design and implementation are not just an issue of technology. There has been no learning from the success of Fix My Street or (in the United States) Open 311. Southeastern’s half-million customers, from one of the most talented parts of the world, are an incredible resource. The company need to do better than this to engage and use them more effectively to help improve their rail service.

Did you also take part in the trial? We would interested in your experience, and for the thoughts of other customers. You can let us know here.