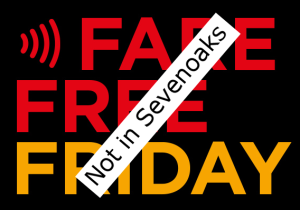 The Good News is Mastercard are offering to refund London-area TfL fares up to £21.80 if bought using one of their contactless cards on Friday 14 November. They’re offering the same deal on Friday 28 November. Full conditions are here.

The Bad News is that Sevenoaks and Otford line travellers will not be able to take full advantage of this – because of the actions of the Department of Transport and Kent County Council.

You can now use your contactless payment card to travel on Tube, tram, DLR, London Overground and most National Rail services in London, as well as on buses.  It works much like an Oystercard, except that it directly debits your account and you do not have to ‘load’ value in advance.  You can also set up an online account to track your expenditure.

TfL also want people to switch to contactless cards because they are cheaper to administer, although they have no current plans to withdraw Oyster.

So what of Sevenoaks?  Unfortunately you cannot use contactless payment cards or Oyster cards at the barriers at Sevenoaks.  Oyster would have been one of the advantages if the London Mayor had taken over the metro train service from Sevenoaks via Dunton Green – as the vast majority of Sevenoaks people wanted.  However the Department for Transport and Kent County Council blocked Boris’s plan.

The Department for Transport have continued to show their lack of interest in improving Sevenoaks and Otford line fares in the new contract with Southeastern.  Rail Minister Claire Perry puffed that the contract included “a commitment to work with TfL to roll out Oyster acceptance to Dartford and Swanley” – but nothing is going to be done in the next four years for Sevenoaks, Dunton Green, Bat & Ball, Otford, Shoreham or Eynsford.

That’s in contrast to the new Thameslink-Southern franchise where the operator has promised that Oyster card will be extended as far as Gatwick Airport to the south and Luton Airport to the north, as well as to “all metro services”.  (Since Thameslink will be taking over the Darenth Valley line trains from Blackfriars to Sevenoaks it will be interesting to see whether they are allowed to make more progress on bringing Oyster to us.)

So what can Sevenoaks travellers do on Friday?