↓
Home Menu ↓
Skip to primary content
Skip to secondary content
Home→Fares→“We are due a fare cut, not a rise!” – Tony Clayton speaks out on 2015 rail fare news 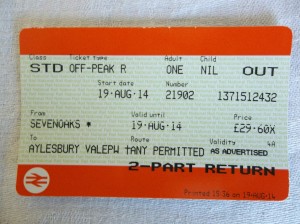 Sevenoaks Rail Travellers Association Chairman Tony Clayton demanded on Nick Ferrari’s LBC show this morning that rail fares from Kent be frozen or cut in the next round of fare reviews in January.

“We have the highest fares on the network  – Sevenoaks Chronicle showed last year that we already pay 10 to 15% more per mile than any other London Commuters, and much more than commuters elsewhere in the country. Fares from Sevenoaks, Tonbridge and Tunbridge Wells are probably the highest on the planet!

On top of this we’re about to see peak time services stopping at London Bridge, which many of us rely on, cut by about 45%, over a period of at least three years. The quality of service is about to see a serious decline.

So why should Sevenoaks rail travellers pay any more at all until the disruption is over?

If you add to this the fact that South Eastern has the worst passenger rating for quality of service and value for money (Passenger Focus rating June 2014), we are due a fare cut, not a rise. A 10% cut to get our fares back on comparable terms with other services would be a reasonable start. And there should be no increases going forward until South Eastern Railways get off the bottom of the service rating.”