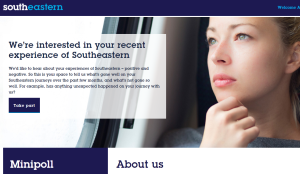 In October 2015 Southeastern launched a Community Panel and invited customers to join it. It has been used to recruit testers for the Problem Reporting Application, but a principal part of the Panel was an online, members-only, discussion group.

The reasons for establishing this discussion group was not clear – a cynic might think that perhaps it was to intended to take some of the more public and strident criticism of Southeastern on Twitter, Facebook and blogs into a less visible private space?

On its website the purpose of the panel is explained as:

Southeastern have set up this community panel, in partnership with Verve (members of the Market Research Society), in order to obtain their customers’ opinions. Southeastern will use your feedback to ensure that the services they provide continue to meet your expectations. Verve will communicate directly with you through the use of a range of activities including surveys, quick polls, interviews and online discussion groups.

A careful reading of this statement shows an odd distinction between Southeastern (“will use your feedback”) and Verve (“will communicate directly with you”). It may be that in Southeastern’s view it can hand off communication with its customers to Verve. That’s not how customer-service businesses normally think, and we certainly do not consider that that’s what people taking part in the forum would expect.

However, and whoever’s job it is, the Community Panel is not working well by the normal standards of community engagement:

In principle all feedback and discussion is good, and so the Community Panel could have been a sound idea if it was intended to engage new segments of their customers and so add to the feedback already provided through social media, through direct complaints, and through rail user groups such as the Sevenoaks Rail Travellers Association (which you can join here!).

However Southeastern do not appear to have made the resource or cultural commitment to engage with members of the Panel and to draw them into a dialogue to improve their train service. It’s a pity that Southeastern have not bothered to make better use of people who are actively prepared to help. But at the moment the Panel is not serving any useful purpose. 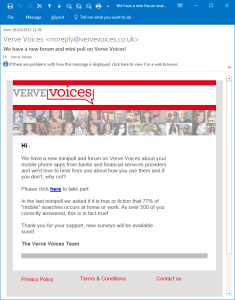 Incidentally we have a record of at least two instances where Verve appear to have used personal details registered as part of the Southeastern Customer Panel for non-Southeastern research – in one case into mobile phones. We do not regard this as acceptable use of personal data by Verve – people enrolling in the Southeastern panel would not have expected their email addresses and other personal data to be used more generally by Southeastern’s sub-contractors. Unfortunately several emails to Southeastern have failed to get a response from them on this important point.

We’d be very interested to hear from other members of the Community Panel on what they thought about the idea, and how valued they feel that their contributions have been. Please let us know here.

Southeastern have axed the Community Panel with immediate effect.